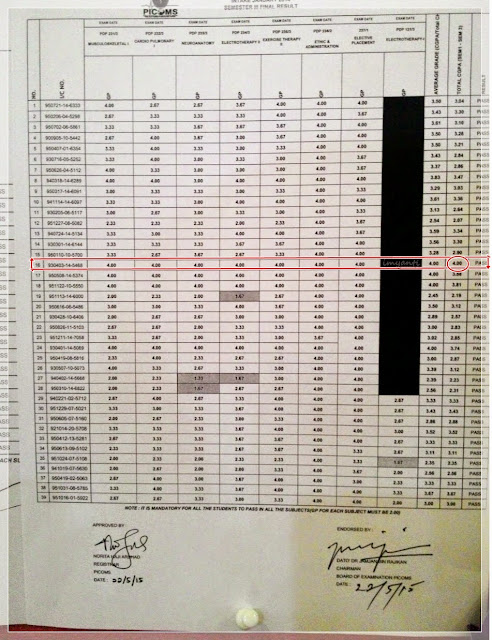 Ayah, ibu and adik-adik are very proud of you. You are the right example for adik-adik. Even though the bench mark you have set is slightly high but it's okay to motivate them. I'm sure they will always look up to you and will likely imitate your achievement.

Okay, last but not least... speechless ekceli sebab ari tu Awin kata, semester nie susah. But I always have faith in you. You can do it and you did it! Congrats!!! 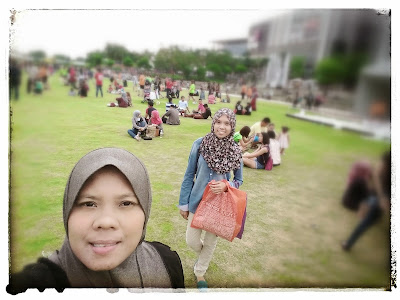 Email ThisBlogThis!Share to TwitterShare to FacebookShare to Pinterest
Labels: my precious

They say when you put human and nature together, only wonderful things can happen. We feast our eyes on the natural tropical climate and smell of the forest. Nothing beats that!

This is Zone D6. The main attraction here is Canopy Walkway (CW) and nature trails through the dense forest, among other things.

Here's the trail. Nampak senang, kan? Just follow the red arrow. But in reality, you have to be fit to explore the forest, serious!

The CW counter is only open at 9:00am, so you must reach there early or else you have to bear the long queue. Last registration is at 1:30pm. The tickets have to be bought here before heading to the CW.

By the way, dont forget to bring water with you as you start ascending, really really  EXTRA bcoz there's no kiosk in the woods. Hehehe...

Danial with his notti face, fooling around with my OppoR5.

Yeay! We arrived at the wooden tower guarding one end of the rope way.

The CW starts here! Inside the tower you will need to show your ticket.

We made it up to the CW, which was on a very rough trail. It's definitely not for the faint of heart or weak of legs!

The walkway does sway and wobble and at first I had visions of the whole thing twisting upside down and spilling its contents (me!) into the jungle below. But compared  to Skytrex, this is nothing!

The biggest single attraction is the CW, an 150m-long series of suspended bridges. Unless you suffer from vertigo, then the walkway is well worth doing. Although it is not tiring in itself, the hike requires a decent level of fitness.

A pit-stop! We enjoyed the gorgeous views from the treetops (25 - 30 m above the forest floor).

*no caption, just enjoy the pic.

I'm proud, you are brave. There are crying children on CW, but you are not one of them.

The trails are not that difficult if you have maintained average physical fitness. But the trails proved to be a bit rugged and so beautiful.

The picnic area is located right along a nice waterfall, where you can also relax in one of the pools of water.

A short picnic. There are a few cheap cafe near the picnic area - or you can bring in your own picnic lunch for that matter.  A few shelters and restrooms are available in the area too.

There are also bicycles for rent. The rental is reasonable at the price of RM8/first hour for normal bike and RM16 for Oscar  bike, while the subsequent hour is RM2/hour. We ended our journey here after spending 7 hours exploring FRIM that day. I would say it was such a productive day!
I don't mind doing this another time.
Anyone likes to join me?

Email ThisBlogThis!Share to TwitterShare to FacebookShare to Pinterest
Labels: feeling

Colours of my life

Life is about moments. Don't wait for them, create them. That's exactly what I did for the past 23yrs with my kids. I dont have to go far to enjoy every moment with them. Going far is a bonus. and they never complaint. Everything we need is around us. We just have to enjoy the moment with our beloved ones.

It's an adhoc plan. We just bought some snacks and drinks, then after Isyak we off to DBSA. Here's Daniel enjoying his balloon's formation while Awin dan Q&M main baling bola monyet. Hahaha!

Me and hubby just berborak santai with Afiq, asking him about his studies at MRSM. SPM is less than six months, so he must well-prepare, achieve the target, the aim. InsyaAllah.

Earlier, it's drizzling. So this podium provide us and other family some shade. I always told my kids, we must be flexible wherever we go. They used to this kind of situation as long as we enjoy the moment together.

Melayan karenah anak2 is part of my permanent job. So I'm okay running here and there with my kids, get dirty with them, be like them. I don't want to be like some mothers who bring their kids to the park but they secluded from the kid's activities. They play Candy Crush or Farm Heroes or Clash of Clan on android and ignore the kids. Pity them.

I assume my life is like my little tiny plastic mugs here... full of colours.

Email ThisBlogThis!Share to TwitterShare to FacebookShare to Pinterest
Labels: opportunities in life

Email ThisBlogThis!Share to TwitterShare to FacebookShare to Pinterest
Labels: opportunities in life

Email ThisBlogThis!Share to TwitterShare to FacebookShare to Pinterest
Labels: It's How We See It

So this is not  'cut a long story short' entry, kan? 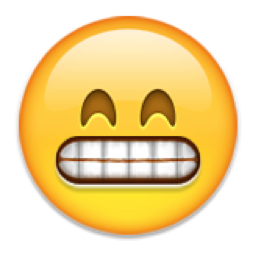 All pictures are taken by my Nikon D5100, HTC Sensation One XE (previous), my Panasonic Camcorder, my one and only Samsung Note 3 and latest, my Oppo R5.

Yanti Arshad
I love being me, an ordinary woman with an extraordinary behaviour. This is the real true stories of my life. Since I am such a forgetful person, I found that by writing it down all the sweet memories into my blog does help a lot. This is also meant to be shown to all my 5 lil' precious when they have grown up. One day, if I have left this world, they would have the chances to keep this sweet memories together with them forever... :)

Me & My Other Half